Breast augmentation with round implants 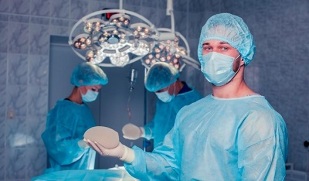 Every patient before augmentation mammoplasty faces the problem of choosing an endoprosthesis. Even after visiting several experts, she may not get a definitive answer.

For a long time, round implants were the only possible choice for breast augmentation. And despite the appearance of anatomical shapes, which follow the natural contours of the mammary gland more closely, the spherical shape remains the preference of many plastic surgeons.

Medicine does not stop, so the new generation of round implants differs from the old ones by the better quality, both in resistance and in the appearance of the final result. Modern round endoprostheses do not look as artificial as before and are also soft to the touch.

Types of round implants

Round implants may differ in the type of filling:

By type of profile, spherical endoprostheses can be:

Who can use round implants

The view that it is better to install round endoprostheses for girls with small breasts is erroneous. The choice of an implant depends not only on the patient's will, but also on her physiological characteristics. When choosing it, the plastic surgeon takes into account the height, the type of figure, the structure of the chest. In addition, it is necessary to take into account the woman's occupation and daily activities. For example, female athletes often use ball-shaped endoprostheses.

When choosing round implants, you can achieve the same natural effect as anatomical ones. It depends on the method of implantation of the endoprosthesis. If a round implant is inserted under the pectoral muscle, then, under its pressure, the gel flows to the bottom and takes the shape of a tear. The degree of muscle pressure depends on your physiological abilities. Installing an endoprosthesis under the mammary gland does not give this result.

Benefits of round breasts enlargement

Round implants are used more often than anatomical ones. They have a number of advantages, so it is up to them to choose both the patient and the plastic surgeon.

Of course, the final choice of implant shape depends only on you, but it is worth listening to the opinion of a competent plastic surgeon, as he has already performed more than a dozen operations and knows how the final result will look in a case. or another.